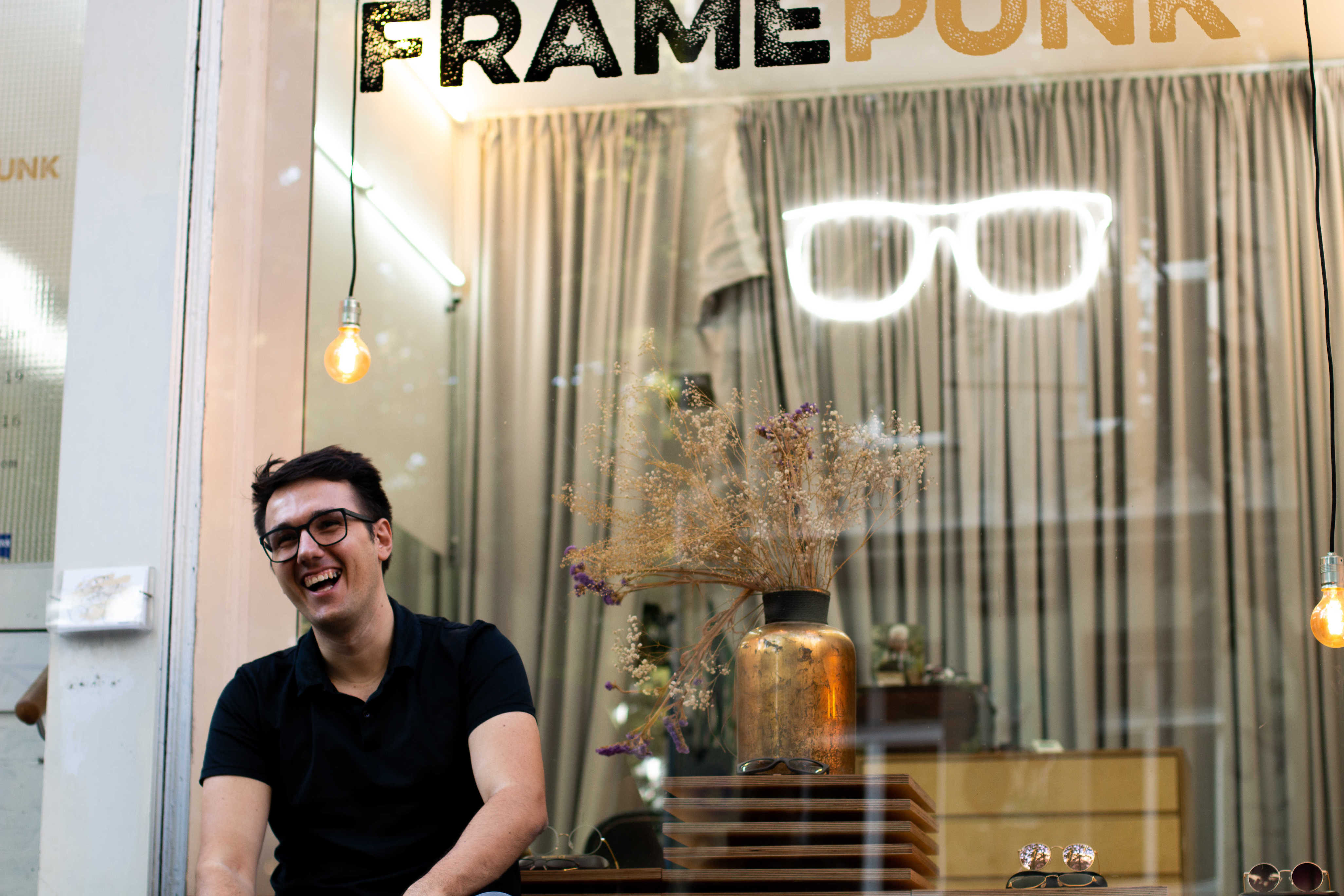 The eyewear industry has seen some innovation in recent years, but one thing it hasn't considered too often is customisation. When you walk into an optician to buy glasses, there’s no leg-room for personalising your specs beyond choosing between their options.

Sure, you can go for a bold, red frame and they will tweak the glasses to sit on your face, but that’s usually the end of it. This is where FramePunk found a gap in the market worth filling.

FramePunk was founded by 30-year-old Andreas in the heart of Kreuzberg. While it may appear to be a regular optician from the outside, it’s far from it. Specialising in 3D printed glasses, FramePunk is breathing new life into a fairly traditional industry and letting customers put a piece of themselves into their glasses.

Initially, 3D printing seemed unrealistic, but now that machine are more affordable, and more sustainable than other means of production, smaller businesses have had a chance to get involved. There are multiple benefits to 3D printing, not least of which is the unique retail experience that it creates.

But the use of new technology isn’t the only way Andreas is keeping his customers interested.

Where it all began

From the age of 17, Andreas knew he would someday open an eyewear store. Coming from a family of optometrists, and wearing glasses himself, he was familiar with the pain points people faced when buying glasses. He had a clear goal: he wanted more happy glasses-wearers, and he wanted to stay ahead of a competitive, evolving market.

So the Berlin-based optician opened its doors in 2013, taking a new approach to eyewear. 3D printers have built prosthetic limbs, created entire homes in less than 24-hours, and even produced food, so why not glasses? The use of 3D printing in retail could revolutionise the industry.

Not only does it allow for customisation, but it can also create zero-waste products.

Made with love and lasers

3D printing does a lot more than bring FramePunk into the future of retail, it allows them to offer their customers a product that is 100% theirs. Andreas has been helping customers print their perfect bespoke specs for years now, and it’s this personal touch that keeps them coming back.

More often than not, glasses are mass-produced. The result? Millions of copies of the same model with no individual flair whatsoever. 3D printing allows every pair of glasses FramePunk designs to be fully customised, and the zero-waste production is an added bonus.

There has been a rise in consumers seeking out ethical fashion, and it's more than just a trend. The sustainability of our products is a growing concern, and 3D printing is a great fix. If used correctly, it creates absolutely zero waste by printing one layer at a time with total precision.

Machine costs, labour costs and energy costs are all lowered by the technology, making it a surprisingly environmentally friendly option. It also decreases the chance of errors and more or less eliminates the risks of traditional manufacturing.

But FramePunk’s main reason for using the technology is so they can offer their clients high-quality glasses. The right size glasses make all the difference, which is why they measure the head and eyes extremely accurately to ensure the perfect fit, something your everyday optician often neglects.

After being measured, customers can choose anything from the size of the frame to the way it shapes their face.

Modern in more ways than one

"In retail, you have to perform exceptionally well every day."

Being self-employed with a small business, Andreas was fully aware he would face some challenges. As a micro-merchant with no investment backing, he knew he would not only have to be smart with the marketing but also with his offering.

If his products were going to be modern, the way he sold them had to be too. “10 out of 10” of his customers walked into his store expecting to pay with card, so it made sense to purchase an affordable card reader.

FramePunk has branded itself as a shop of the future that always has the interest of its customers at heart.

The customer journey doesn’t end with picking out a product, it ends with a payment. And the personalised, individual experience he offers everyone who visits his store extends to how his customers decide to pay. Everything on their terms.