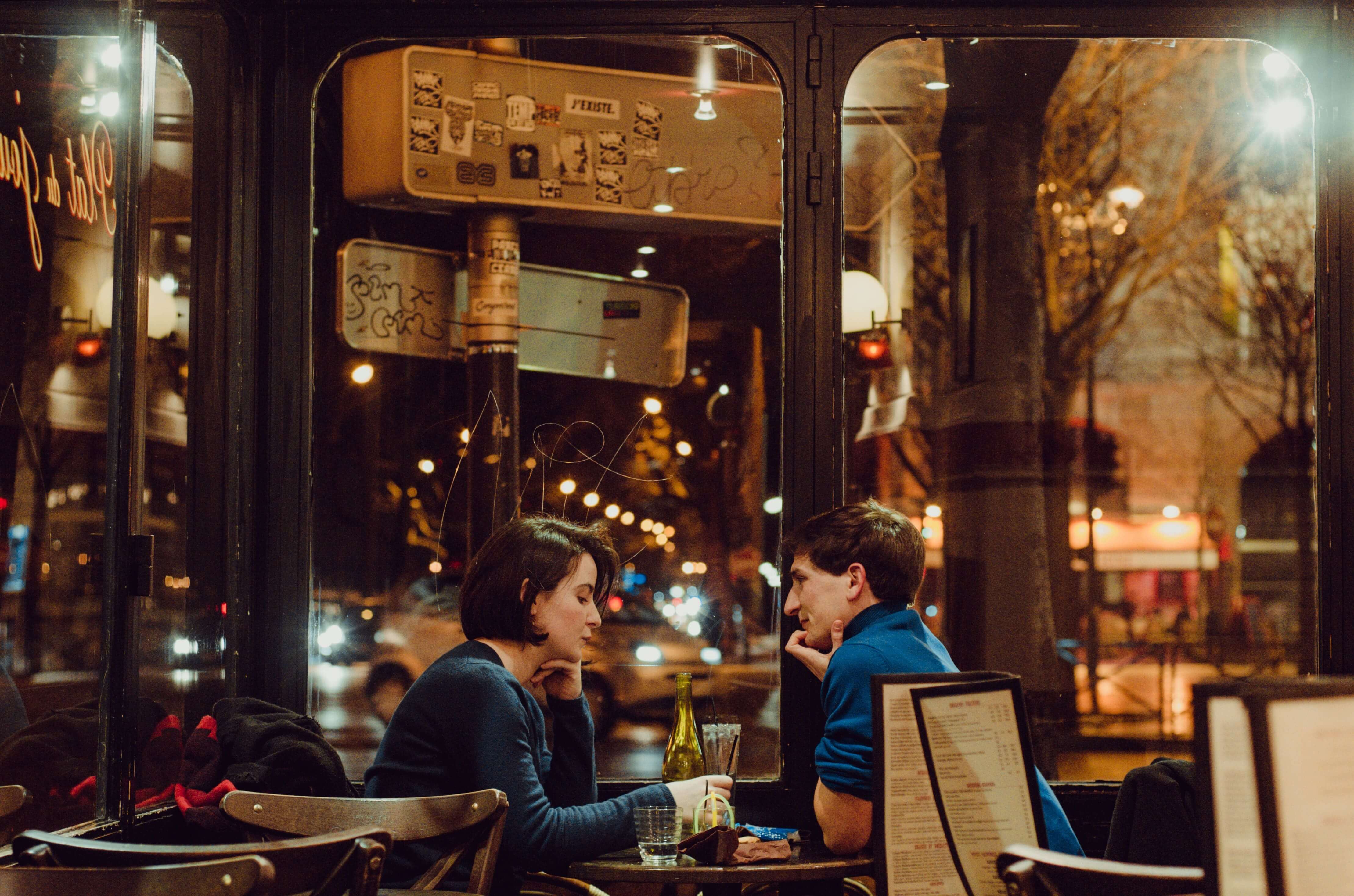 A lot of predictable things happen on Valentine’s Day; dating apps receive a few more swipes, our news feeds are flooded with a river of red-themed advertisements, and a chunk of the population spends a lot more money than usual–all in the name of love. Yet, we had some questions regarding human behaviour on this particular day. Combining Open Data, proper research and utilising data from anonymous SumUp transactions, we’ve come up with a few theories.

When used ethically, data opens our eyes up to how we function as humans and enables us to make decisions based on our findings. And while looking into Valentine’s Day data isn’t going to change the world, it sure was fun.

Tinder, OkCupid, and Spotify have all been known to showcase both the intriguing and the funny side of their companies’ anonymous (big emphasis on anonymous) data. We thought we’d follow in their footsteps to see what we’d find out.

We’ve all heard the saying before, but is there any truth to it? “To go Dutch” supposedly came into the public sphere in the 17th century, but it had nothing to do with splitting the bill on an awkward blind date. It was allegedly created by the English while negotiating trade routes and political boundaries with the Netherlands. The English thought the Dutch to be stingy when in actual fact, our data shows it to be the other way round.

Using the anonymised data from over 20,000 payment transactions in 2018, we looked into payments processed on our SumUp card readers in merchant-owned restaurants, fast-food chains, and cafes in 12 European countries to see how much bill-splitting goes on during Cupid’s special day. So, how did we do it?

We analysed transactions of identical payment amounts that were taken by the same merchant within 60 seconds of each other, allowing us to assume the payments were made for the same bill and not for a separate transaction. This is what we uncovered:

It turns out French daters were happiest to split the bill, accounting for 25% of split transactions on Valentine’s Day. They were closely followed by the British with 24%, and the Dutch came in third with 14%. The Swiss tallied in at 7%, Belgian and Italy tied with only 3% of daters dividing up the costs, and the Polish and Irish both came in with 2%.

The most unlikely culprits to split the bill on Valentine’s Day? Sweden, Finland and Portugal, who all drew with a low 1%.

Here’s the simplified version of the “Going Dutch” data:

We probably left this analysis with a lot more questions than answers. Has modern dating fever struck France with couples welcoming dividing up the costs of a romantic night out? What do Finland, Sweden and Portugal have in common? And does the term ‘Going Dutch’ really still apply?

Dating site OkCupid is pretty well known for sharing some excellent insights on our dating habits. In 2017 they released a few infographics on how progressive U.S millennials were when it came to splitting the bill on a first date. Surprisingly, only 15% of men and 32% of women said they were willing to go halves on a first date with a bulk feeling indifferent.

Are Europeans more willing to split? Has society adopted a more modern approach to dating in the last two years?

How much are we really spending?

In 2018, Data journalist Martin Armstrong found that 79% of Brits only celebrate Valentine’s Day because they feel pressure from outside entities. This can be anything from social pressure to consumer pressure. With an estimated half of the country celebrating the day, how does this pressure (and for some desire) to celebrate affect spending habits?

Well, the UK now spends more on February 14th than they do on Easter, and older millennials, aged 28-37, appear to out-shop other generations. Shoppers have also started to wise up and look towards discount shops and special deals to soften the blow to their wallets. What does this tell us? Whether we like the holiday or not, we’re still spending!

Last year, Forbes analysed key consumer spending trends in the U.S. Interestingly the data showed that 55% of the population intended to celebrate the often labelled “Hallmark holiday.” They also saw spending fluctuate with dips and rises over the years.

The average person spent $88.98 on their significant other,followed by $25.29 on family members, and $7.26 on classmates/teachers. Trends also showed people spent money on their friends, pets, and co-workers, so it’s safe to assume the holiday’s routes have expanded far beyond the traditional couple.

So, what are Americans spending their money on in 2018? Jewellery ranked in first place with an impressive $4.7 billion, followed by an evening out at $3.7 billion, flowers at $2.0 billion, clothing at $1.9 billion, and candy at $1.8 billion.

Technology has definitely played a role in this with 44.7% of shoppers using their tablets to purchase Valentine’s Day products, and 36.9% using their phones for shopping research. And what about the non-celebrants? They’re likely either treating themselves to something special, planning a get-together with friends or purchasing an Anti-Valentine’s Day gift.

Alternative Valentine’s celebrations or anti-celebrations are phenomena that seem to have started popping up over recent years. With singles parties and Galentine’s Day making a debut, it’s apparent that this time of year has found a new breath of life. And, why not?

The way in which we celebrate the day has drastically changed since its conception anyway, and varies around the world, so why not celebrate with a twist?

Take a look, for instance at Catalonia, where it’s referred to as La Diada de Sant Jordi and is celebrated two months later on April 23rd. South Koreans have two separate days for the celebration. The first takes place on February 14th where women give chocolate to men, and the second takes place on March 14th where men give candy to women.

Are we cliché consumers?

There’s been a lot of talk on how we spend more on this special day, but we wanted to see if and where that was reflected with our merchants. We analysed the anonymised transaction data of grocery stores, bakeries, delivery, and catering services, restaurants and cafes, fast food restaurants, jewellery stores, and florists on and leading up to Valentine’s Day to compare them to ‘average’ spending days.

While we cannot be 100% sure that the purchases were all linked to Valentine’s Day, we certainly saw a massive spike in these venues. A lot of the data was predictable; increased spending in florists, significant increases in restaurant visits, and a rise in grocery purchases. Is the rise in grocery purchases a result of more couples preparing for a romantic night in or savvy single people avoiding the imminent restaurant rush?

In 2017 we noticed a striking boost in fast food spending leading up to and on Valentine’s Day. Were people swapping the cliché steak dinner for two for burgers and a side of fries? If so, we applaud you.

While the data was relatively foreseeable, one thing became clear both with our data and the open data of others; February 14th isn’t just for couples anymore, and whether we accept or reject the holiday, we’re still splashing the cash on it.

Technology has definitely played a role in increased spending. Easy access to online shopping and simplified payment solutions equates to people being more willing to spend. The easier the process, the easier it is to tap that card down.

*A note on Open Data:

It’s easy to make assumptions when you hear the term Open Data. We’re not talking about revealing your deepest data secrets or Facebook messages. Think more along the lines of crime statistics, workplace happiness reports and employment rates. As a society, we’re becoming a lot smarter about how we govern and control ethical data practices. And while receiving hundreds of GDPR emails and cracking down on who sees your data is definitely a positive and necessary movement, Open Data can be incredibly valuable and insightful.

Want to simplify your shoppers’experiences? Check out our website for more information.

Fintech and payments, what should we expect in 2019?
6 Surprising Benefits of Going Paperless