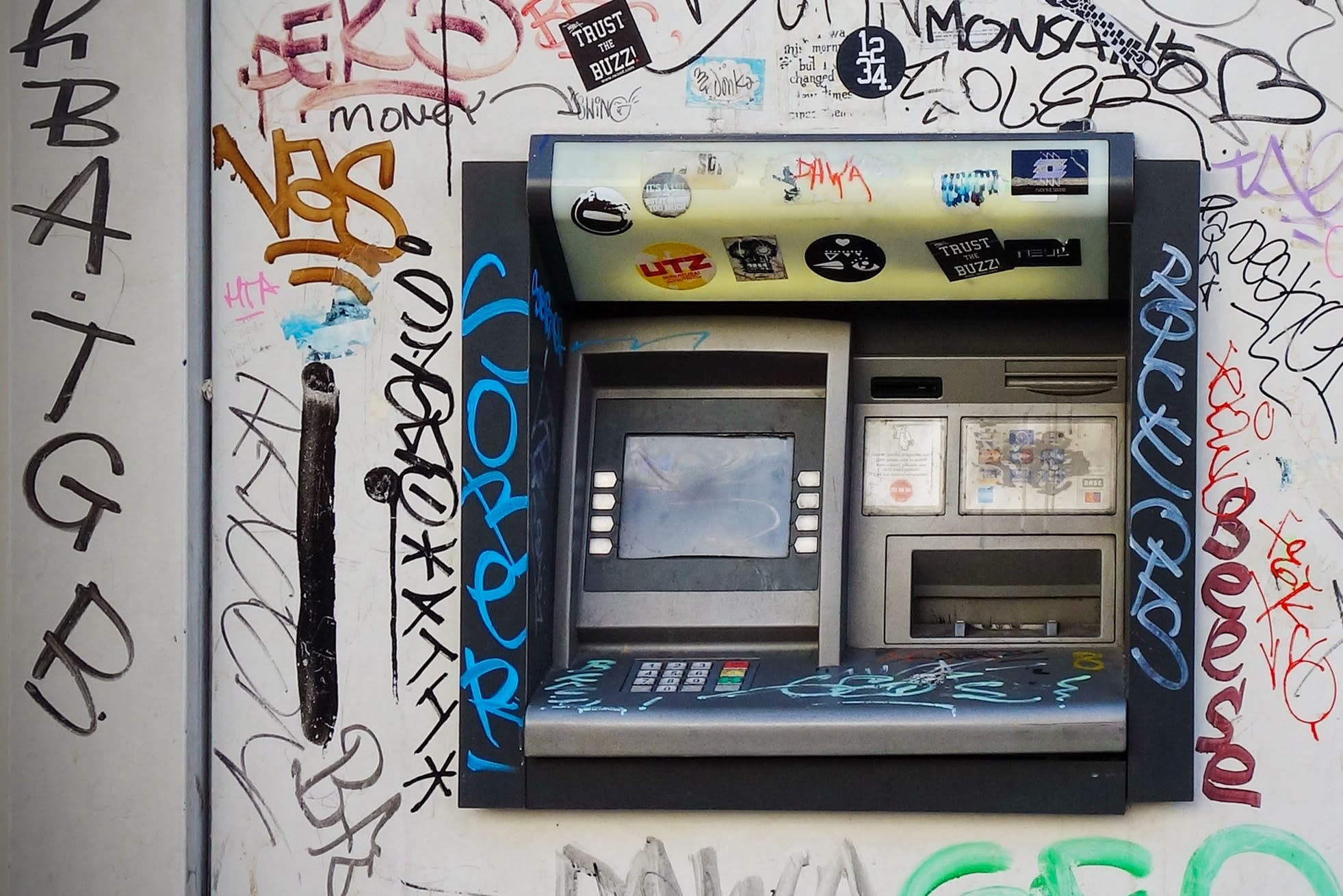 ATM 'deserts'–On the path towards a cashless society

With roughly 60 bank branches closing a month in the UK, and an estimated 488 cash points, it’s no wonder the term ‘ATM desert’ has started to circulate. And with a town in Stoke-on-Trent becoming the first to have no access to free cash points, the media and the public have started to debate the pros and the cons of a cashless society.

During the first quarter of 2014 and the second quarter of 2016, a rise in UK cash points totalled 70.6 thousand. We have, however, seen a decline in recent years which can certainly be linked to a shift towards online banking and modernised payment processes.

Statista found the UK to have 65.4K ATM’s and Europe 420.2K. With high street banks regularly closing, this data is anything but unpredictable. Debit card payments have clearly overtaken cash payments as the preferred method of payment in the UK for the first time ever.

In 2018 alone, consumers looked to their debit cards to make 13.2bn transactions, which is a 14% increase from 2016. Naturally, cash transactions fell 15% as a result.

This is unsurprising, considering two-thirds of the population use contactless payments and the use of contactless cards make up 5.6bn of the 13.2bn transactions. So, while a transformation from cash to card certainly is happening, we seem to be going along with it.

It is easy to make assumptions when it comes to this topic, and if the gradual shift away from free cash withdrawals towards digital payments is not executed properly, a small demographic of people could feel excluded in the movement.

However, there are endless benefits for both merchants and consumers and countries like Sweden are putting forward programs to ensure that those who are not FinTech fluent can keep up. Let’s dig a little deeper...

A British town called Burslem made headlines recently for becoming the first large town in the UK where it was no longer possible to withdraw cash for free. Every ATM now charges its 24,000 residents 95p per withdrawal.

Free ATMs are becoming expensive for banks to implement, and with high street banks like NatWest, Lloyds and Nationwide closing down branches, ATM withdrawal fees have surged, often affecting rural areas the most.

There has been a lot of negativity surrounding this shift, and locals expressed “feeling robbed of free access to their funds, while business owners and shoppers say the lack of cash machines makes things very difficult.”

But let’s look at things a little differently…

People would not be withdrawing cash from ATMs if they didn’t have cards. So the issue here is less that ATMs are now charging, and more that merchants have not had access to reasonably priced, bureaucracy-free payment solutions.

This is, in actual fact, more of a merchant problem than a customer problem. As a company that works with micro-merchants, we know that keeping a smaller business afloat is already exceptionally difficult. The added layer of a so-called ‘ATM desert’ makes things remarkably tougher. So, what’s the solution? Filling the card acceptance gap. Traditionally, ordering a card reader for your business was quite the ordeal. The purchasing of more long-established, standard card machines has always been expensive, and for small businesses, it comes loaded with bureaucracy that more often than not is too strenuous to bypass.

That’s where issuers like SumUp come into the equation. The goal should be creating affordable and easy technology that can help bring the small guy into the future, so nobody gets left behind. The digital revolution does not have to be classist or exclusive.

Accepting card payments not only makes business more efficient, but it also allows people to make purchases that don’t necessarily break the bank. Think of it this way–it’s possible to purchase an item with a value of £1.00, but it isn’t possible to take this out of your nearest ATM, for free or with a fee.

Sweden: A cashless IKEA, e-krona and a decrease in crime

In 2018, The New York Times released an article on Sweden’s push towards getting rid of cash, and some of the backlash (and praise) this has faced. Sweden is living in the future when it comes to payments.

“Ask most people in Sweden how often they pay with cash, and the answer is “almost never.” A fifth of Swedes, in a country of 10 million people, do not use automated teller machines anymore. More than 4,000 Swedes have implanted microchips in their hands, allowing them to pay for rail travel and food, or enter keyless offices, with a wave. Restaurants, buses, parking lots and even pay toilets depend on clicks rather than cash.”

Sure, the microchips may be taking things a little far, but the point is, as a society, they have really looked towards payments to simplify the day-to-day. 18-24-year-olds in the country make more than 95% of their purchases by using a debit card or a Swedish smartphone app called Swish, which is a payment system put into place by the country’s largest banks.

An Ikea in Gavle, on the outskirts of Stockholm, even tested out the effects on their business of going cashless for a month. Their reasoning behind this was that only 1% of their shoppers paid for items using cash, and this took place mainly in the cafeteria.

They also discovered that employees spent roughly 15% of their time sorting through cash and counting change. The test gave employees more time to focus on their work and help customers out on the sales floor.

It turned out that only 1.2 of every 1,000 customers were not able to pay as a result of the experiment. But as this often occurred in the cafeteria, employees would give the food to customers for free.

Crime rates have also reduced in Sweden as a result of banks and merchants handling less cash; “Last year, only two banks were robbed, compared with 210 in 2008 because banks are keeping less cash.”

There has, of course, been some concerns raised regarding the speed of the cashless movement and whether or not it would exclude older generations. The Swedish National Pensioners Organization’s leader, Christina Tallberg stated that;

“We have around one million people who aren’t comfortable using the computer, iPads or iPhones for banking. We aren’t against the digital movement, but we think it’s going a bit too fast.”

While this may be true, efforts are being made to bring the older generation into the future, with open courses and access to information that makes the move to a more digital world easier. Perhaps this is something other countries should take into consideration.

With their banks becoming progressively more cashless, a digital currency referred to as the e-krona will be trialled in 2019. The purpose of the e-krona would be to calm down the current cash situation by ensuring that the “functions of a currency backed by the state would remain, even in an all-digital world that is fast approaching.”

Adapting to a cashless society: What are the benefits?

It’s already started to happen… As LivenPay pointed out;

“Sweden and Mexico have already rolled out real-time payment systems like the NPP. In 2016, India removed its highest denomination bills — removing 90% of paper money from circulation. The People’s Bank of China is looking into digital currencies and has acknowledged that physical cash may one day become obsolete.”

So, why are economies choosing to venture down this path? The most obvious benefit is convenience and efficiency. It’s a lot faster to tap a card down on a reader than it is to find loose change buried in your wallet, but what other advantages are there?

What needs to happen first?

While it may be obvious that we are far away from a cashless society becoming a reality, changes should be made now to ensure a solid foundation is in place for later. Two things, in particular, need to be certain;

Banks need to start stepping up to the plate. While Open Banking and PSD2 will certainly accomplish that and help them to modernise, there is a clear need for the technology used by banks to have some sort of a “facelift.”

According to Which? Money, “British banks are being hit by IT or security failures that prevent customers from making payments at an average rate of more than once a day.” It’s no wonder that consumers are looking towards forward-thinking FinTech companies to gain more control over and safer access to their funds.

We also need to make sure that everyone is along for the ride. Merchants need to have access to cheaper, simpler ways to manage and accept payments, and customers need to feel as though they are part of the digital revolution.

There will be a small demographic of people who will struggle with a cashless society, but it should be our job to take them with us through simplified technology, education, and affordable services. Take your business into the future with one of our card readers and visit our blog for more business tips and tricks.

What is 'Disruptive Innovation'? Pushing past the jargon
How to motivate a team–and why it’s important for your business